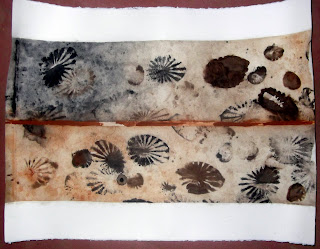 What was it all about? As the only member of the Virginia Friends of Mali able to represent the organization at the 2011 Festival Sur le Niger, this trip to Segou became a sojourn with a few missions. The AUPAP project needed a member of the US-based committee to document the sites before construction and be present for the tendering process, if begun. I had been invited by the Festival Foundation to participate in the annual artists' workshop/exhibition. In and amongst all that my job was to learn a bit more about life as a Malian, or about life in Segou. And I got a very good glimpse. But really, as was pointed out numerous times, until I can speak Bambara fluently, I'll never be more than a toubabou.

I left Virginia on Jan. 3rd, arrived in Dakar on the 4th, flew to Bamako on the 5th. My one day layover in Dakar was to visit with my father and stepmother at their home and my aunt who was visiting Africa for the first time. My father determined that my one day in Dakar was best spent on two sites: Gorée Island and the new national monument of Senegal. When you understand the geography of the slave trade and the "age of exploration" (which one might also call the "first age of global imperialism" you recognize that Senegal's history is Mali's as well.

4 jan 2010
Ma voyage au Mali a commencé en Sénégal. Well actually it commenced with my farewells to Taimir as he caught the bus to school, to Walker as we loaded up the car for the airport and to Phil as we had a leisurely chat in the waiting area not wanting to part company a moment too soon. However, 20 minutes later, having missed the flight from Richmond to DC, we returned to the parking deck and my beloved Phil drove me to Dulles airport just in time to catch the flight to Dakar. Otherwise the nice man at the United counter in Richmond could only offer me a trip to Dakar via Chicago and Brussels by which I would lose the day with Dad in Dakar.


After a thoroughly uneventful night flight directly across the Atlantic ocean at 37,000 feet for 7.5 hours, Dad and his friend Bakry met me at the airport in the dark of the morning. Half an hour later I joined aunti Anne at the table in the living room of Dad and Jayne's place enjoying mint tea, baguettes with butter and papaya halves. A nap quickly followed and chased by a lunch of fish, vegetables and jola rice (yum) and OFF we went, to the Embarcadero - Dakar's major shipping port - to catch the boat to Goree Island.

This photo is of the island as the ferry approached. We made four stops while touring the island, a fifth and sixth in Dakar.


First to the Maison des Esclaves (House of Slaves), the building with the infamous "door of no return" (porte du non retour) and cells which housed captured people separately by gender and ages; doorways long bereft of their iron barred doors are now labeled with 20th century signage "Hommes" (men) "Enfants" (children) "Petites Filles" (young girls) "Femmes" (women) and most encouraging though awful "Les Recalcitrants" (the recalcitrant or incurably resistant). The building is much smaller than I had imagined from the many photos I've seen, but it doesn't matter when you factor in the hundreds of thousands that exited this door of no return over centuries of capture, sale and shipment.


Second we visited the printmaking workshop of a friend and colleague, Mahmadou Kansy. Kansy joked with Dad like only old colleagues and friends can do and we were lucky to be able to see a folio of a three artist project Dad did with Souleyman and another artist in 2005 - beautiful lithographs and etchings (?). There was another artist, a local sculptor, working on a print project. We apologized for the interruption and headed on. 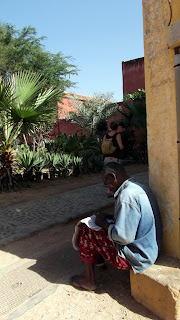 Third was to the Mairie which includes a new art gallery, to see a very nice exhibition of paintings and watercolor drawings by Dad's good friend, Souleymane Keita. The installation used the room very well - tying the work to the site effectively. Lovely work.


Fourth we walked quickly by the Goree Institute where Dad and Jayne first lived and worked in the late 1990s. It took me a while to step back and say, what? you LIVED on Goree Island? It is a beautiful small island where there are no cars, no motorbikes, only pedestrians. Ancient buildings and armaments. Souleymane Keita is from the island and I got a shot of the house where he grew up. We got water, regretfully declined to buy souvenirs, and waited for the boat to take us back.

Fifth the sky has been bright, though really smoggy and Anne and I began to smell 1980s Los Angeles in our nostrils. Dakar is smoggy. After stopping to pick up some clothes that Anne had made, we trekked (by car) on up to the Mamelles (Breasts), a pair of hills overlooking the city, to see the latest object of "national pride": an enormous (Statue of Liberty enormous) bronze statue of a Woman, Man and Baby pointing upward and eastward (toward the continent). The idea of the president of Senegal it has the distinct aesthetic of a 1930s Chinese social realism. There is a restaurant in the crown of the man's hat. 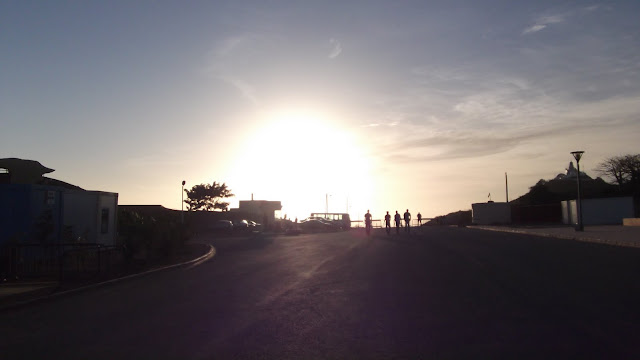 The sun set as we visited, so we got some nice shots in the brilliant light and then headed back to the house, passing a beautifully situated new mosque; tucked into a cove overlooking the ocean. This shot is of the sun setting on one of the Mamelles on 4 Jan 2010:

Following are Anne's shots taken in Dakar... her sunrise is spectacular and true.